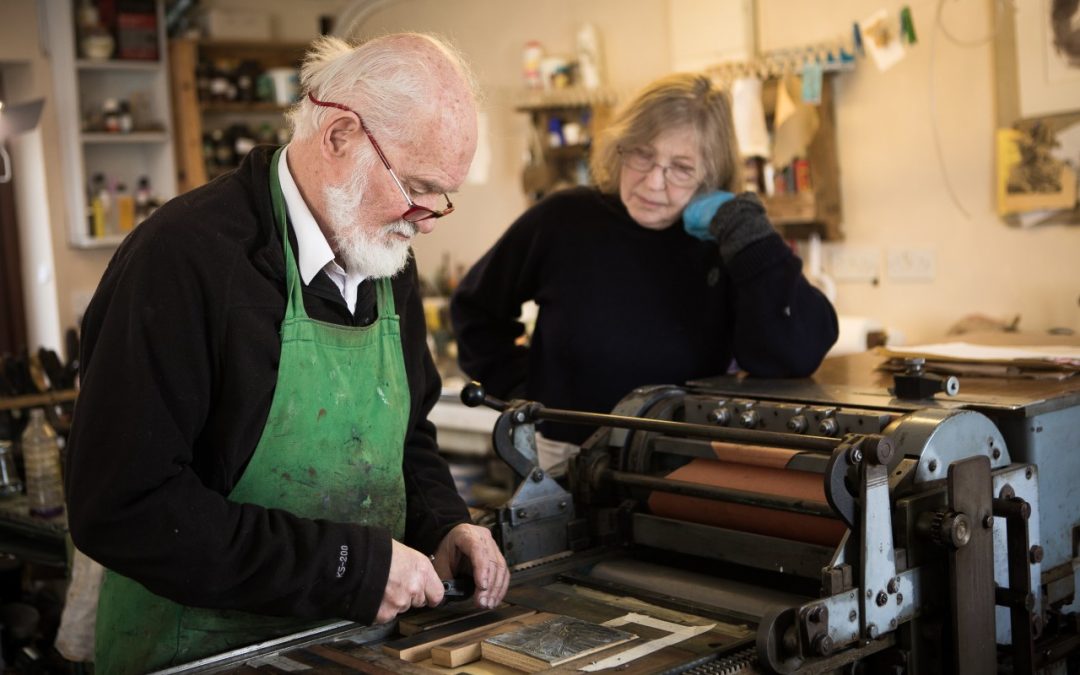 THE ULSTER CANADA INITIATIVE, has produced a short biographical film documentary by Harry Kerr and Martha McCulloch on the inspiring work of two artists, Ros Harvey and Tim Stampton. From their home and studios near Malin Head, Inishowen, they have, for the past thirty years, continued to develop their practice in this most remote of locations. Artlink is sporting the film by hosting the launch on Facebook Live and has organised a “Covid-19 compliant” exhibition of the artists’ work in the windows of the former ESB showroom at the West End, Buncrana.

Ros and Tim’s work draws inspiration from their environment, its history, heritage and wider culture. Choosing to forego the ‘benefit’ of working in a more convenient location, being cut off in some respects from the amenities that life in a more urban setting might offer, these artist have chosen to locate themselves in this rural, coastal context while maintaining links with artists and galleries internationally.

Ros’s family roots are in Malin where she spent her childhood, attending school in Belfast and completing an apprenticeship course in Dublin before moving to England. Having been busy with her family life in England and Australia she returned to Ireland in the 1960s and became an accomplished ceramic artist, working in Dublin from 1966 –79 and in England until 1988.

Tim Stampton was born in Brighton, emigrating to Canada when he was seven years old. After schooling in Newfoundland, Tim attended Canterbury College of Art in the UK, followed by four years apprenticeship to the renowned ceramicist Bernard Leach, in St.Ives in Cornwall. He returned to Canada for a time, teaching ceramics at Memorial University, Newfoundland. Tim and Ros met through their mutual interest in ceramics.

In 1988 they decided to move to Ireland, so they followed Ros’s roots to Malin.

Ballagh was a vacant two-storied house with old crumbling outbuildings, so they set out to restore these for studios. Ballagh Studio now houses a printing workshop, gallery, paintings studios and a framing shop. Here Ros paints and Tim makes handmade prints from his engraved wood blocks and prints limited edition artists’ books.

Perhaps one of the greatest challenges facing artists in remote rural areas is that of gaining exposure to the public at large but Ros and Tim represent a model approach. They have a warm welcome for visitors and are delighted to discuss their work and demonstrate their techniques. They also offer the Print shop facilities to other working printmakers. The film aims to increase the visibility of Ballagh studios locally, nationally and internationally, so that more people will venture up the long winding road to their studio, gallery and print workshop.

Generations of young Irish artists have felt the need to study abroad and later emigrate in order to succeed in their career. Ros and Tim demonstrate that, with enough determination and conviction, this needn’t be the case. They show that artists of an international calibre can live and practice here in Donegal and demonstrate the creative value of a deep engagement with place.